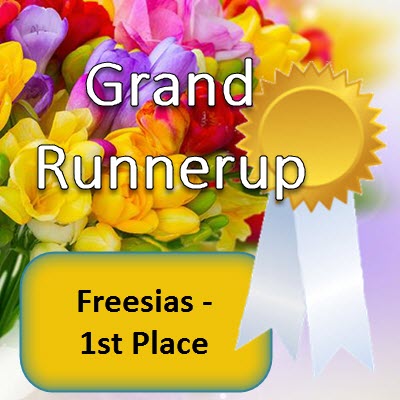 Some writers believe that short stories are harder to write than novels.  Here’s one that is even shorter than most. Our first Nutshell Narratives contest asked for stories up to 350 words long. This wonderful author achieved his goal in a mere 87 words.

Congratulations to Jon Giles of Charlotte, North Carolina.  His story, “Two Weeks”, won first prize in the Nutshell Narratives subcategory of Freesias, and was the Grand Runner Up of the entire contest!

Jon shares his experience of writing this story: “Inspiration comes from many places, but oddly there is not a specific source for ‘Two Weeks’.  One read over the haiku ‘Freesias’, and the pen just hit paper.  A few short sentences later, satisfaction rang and the pen was capped.”

Later, he walked past the single vase that had been holding memories for the last two weeks. Pain, sorrow, joy, love. The yellows were faded, the pinks and reds had turned to various hues of decay. One of the stems stayed rigid, upright and proud; the single blue in the batch still, miraculously, thriving. Fitting, as the exact shade, somewhere between lavender and periwinkle, was her favorite. The flowers on their wedding day, the flowers on her casket. The last vestige of her hope for another day.

Learn more about the author:

Learn more about the contest which inspired this story:  Nutshell Narratives 2019-01